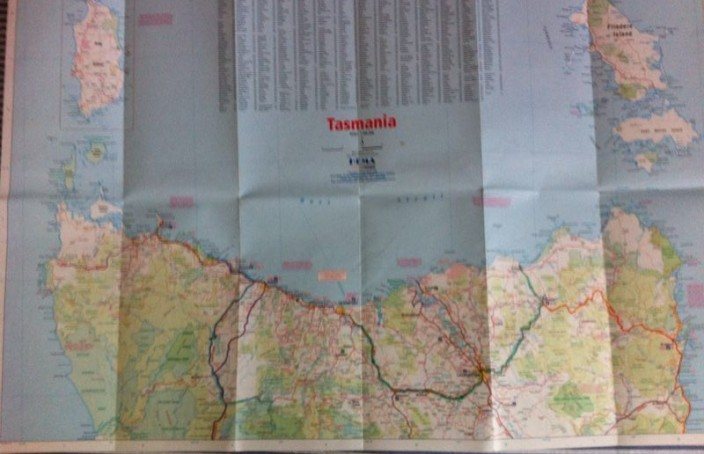 „Did you see the Tasmanian Devil in Tasmania? I bet it’s sooooo cute!!“

That always was the first question when I came back home from my trip to Australia. Yes, I saw it. And no, it’s not cute. The guy who gave the animal its name surely knows why he called it „devil“. But more to that later. First I’m telling you about my road trip across Tassie.

New Year’s Eve in the sun. I always wanted to experience that. In December 2011 my friend Katharina was on her third trip across Australia and I used that chance to visit her. My trip started right after Christmas from Frankfurt via Shanghai to Melbourne and immediately onwards to Tasmania.

We stayed with Katharina’s family in Devonport for the first night. There we planned the trip roughly and started right away the next day, which already was New Year’s Eve 2011. We borrowed a car and tent from a friend and stocked up on beer and food for the next 4 days.

The first stop should’ve been a hip campsite in Bridport where we wanted to celebrate New Year’s Eve right at the sea. After about 2 hours of driving we arrived in Bridport in the afternoon to find the campsite fully booked. Not a single spot was free for our small tent. Afterwards it was good that we didn’t get a place there – the next day newspapers said there was state of emergency that night and some people even got hurt.

So we drove on from Bridport to Scottsdale. That was the nearest town and as we had no further chance celebrating at the sea it didn’t really matter where we spent the night. We found a small campsite with only a few tents and caravans next to the street. As the sun already started to set and we only had a very small torch light we had to hurry up building up the tent. In the end the sun set faster than we thought and we had to use the headlights of the car to get finished.

We wanted to make burgers for dinner. Almost every of Australia’s campsites have grills everybody can use with coins. Unfortunately not all of them have lamps and so our little torch light became our doom in the dark. It’s not that easy to cut tomatoes and barbecue burgers in the pitch dark. And the batteries of the torch also weren’t that new… 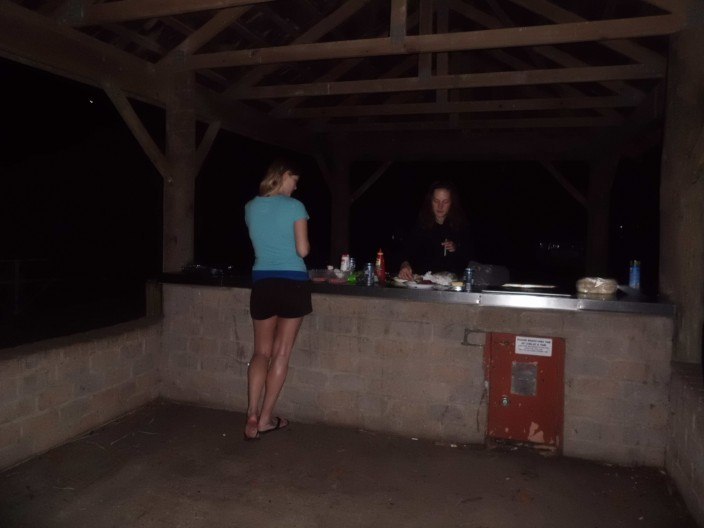 After a while another camper took pity on us and lent us a big light he carried in his caravan. Everybody is always very friendly and helpful in Australia by the way.

After our dinner we grabbed a beer and waited in the car for the announcer on the radio to wish us a happy new year. Afterwards we went to bed immediately to be fit for the next day. That was one of the shortest but best New Year’s Eves I ever had.

The sun rose very early the next morning and it got hot in the tent real quick. Usually I’m a late riser but at 7:00am we both were wide awake. Thus we packed the tent and set out for the Bay of Fires where we wanted to spend New Year’s Day at the beach.

Bay of Fires is located at the northeast coast of Tasmania and is famous for its snow-white beaches and the clear, azure water. The bay has its name from a captain who saw fire at the beach standing on his ship by the way. But the name could just as well come from the red lichen you can find on almost every rock in the bay. 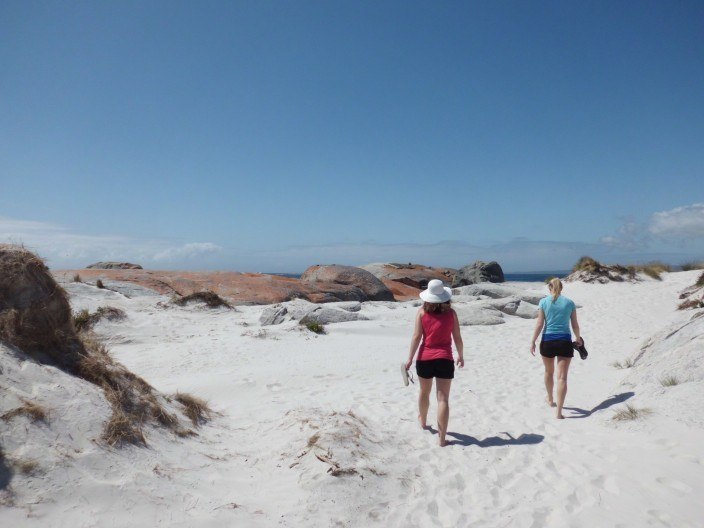 I couldn’t image anything better than spending New Year’s Day at that beach. We drove to St. Helens on the highway and than to the Bay of Fires alongside the coast. The ride already was stunning but when we arrived at the bay I wasn’t able to say a single word anymore. I’ve never seen such a beach in my life. Miles long. Nothing around it. No people. Snow-white. Amazing! We spent almost the whole day there with more than 30 degrees Celsius. 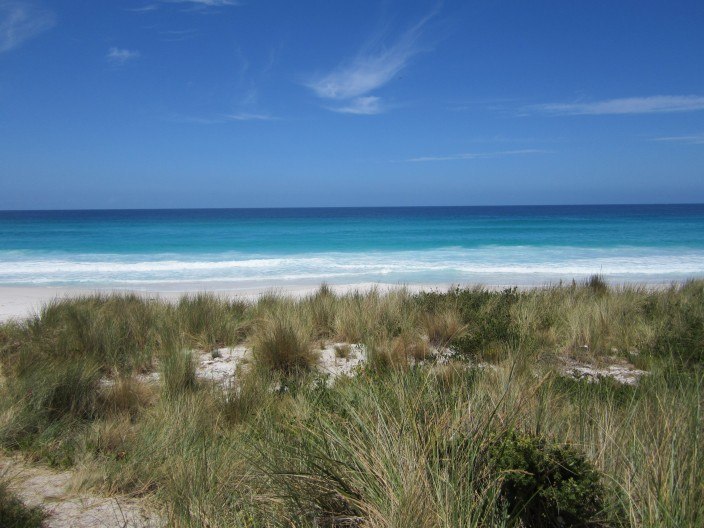 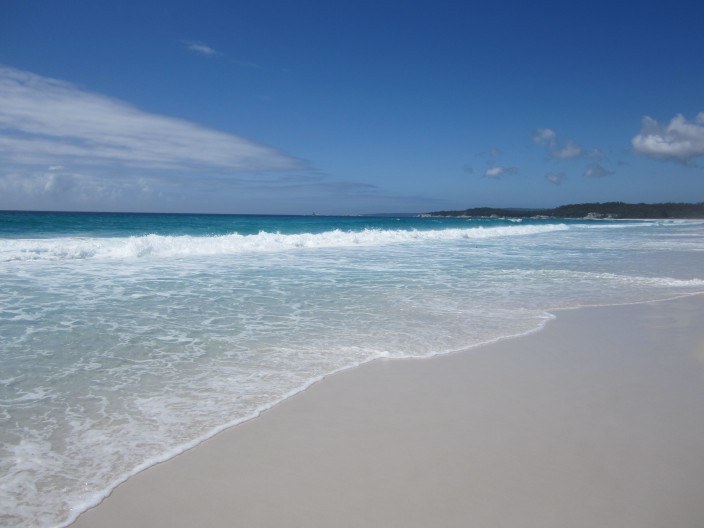 We left the beach in the afternoon to find a nearby campsite for the night. We found one in Bicheno where they didn’t only have spots for tents but also have huts you can rent if you don’t have your own tent or caravan. That’s really useful for people like me who have a basic distaste for camping. But as we had our own tent and Katharina had to persuade me for days to go camping we built up the tent again. At least we had an airbed and didn’t have to sleep on uncomfortable sleeping pads. 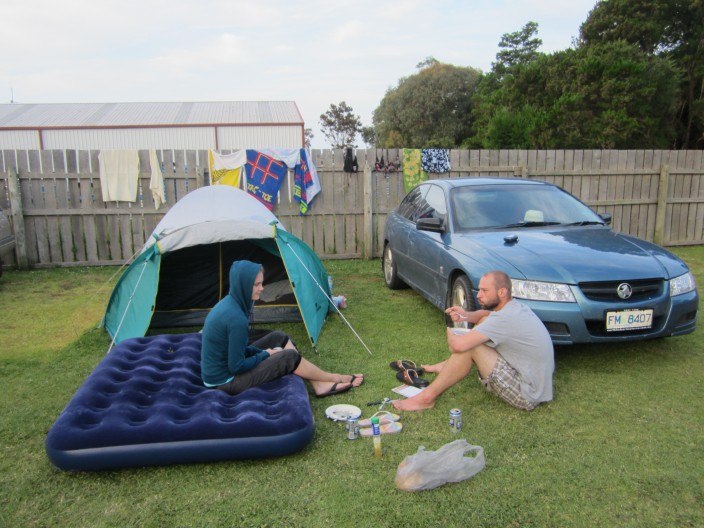 The next day we planned to visit Wineglass Bay. The beach is located in the Freycinet National Park and is supposed to be one of the 10 most beautiful beaches in the world. I couldn’t miss out on seeing that!

We drove from Bicheno to the National Park and parked the car in the parking area at the entrance. Actually we planned to camp in the National Park after another day at the beaches of Wineglass Bay. But we dropped that plan and left our equipment in the car. In the end that was a really good choice!

Why? Because the way to the beach is hard work. It consists of two stages: The first one is a 1.3 km ascent up a loose gravel track. The track is steep and winds it way through the Hazards. That first stage was the hardest part for me – 30 degrees Celsius and uphill all the time. But I got rewarded with a spectacular view of Wineglass Bay from the viewing platform we used for a short break. 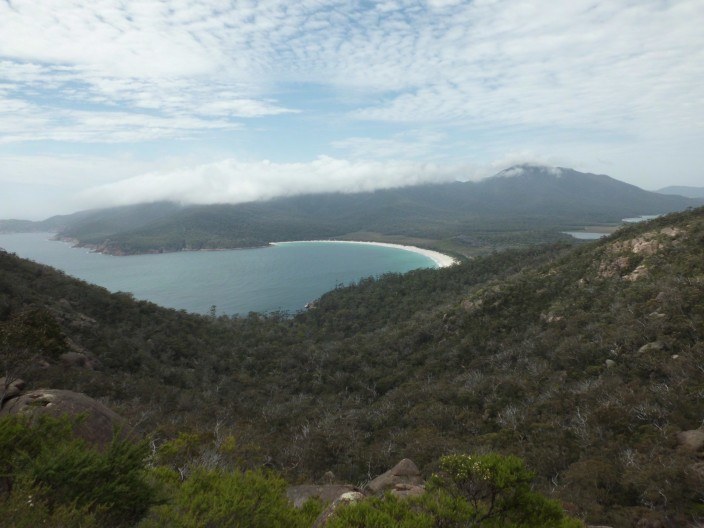 The second stage is leading through the Hazards to Wineglass Bay – fortunately downhill all along this time. The way is a bit shorter and we met all kinds of animals en route. I was surprised that the animals just sit alongside the way and don’t care for all the people passing by. 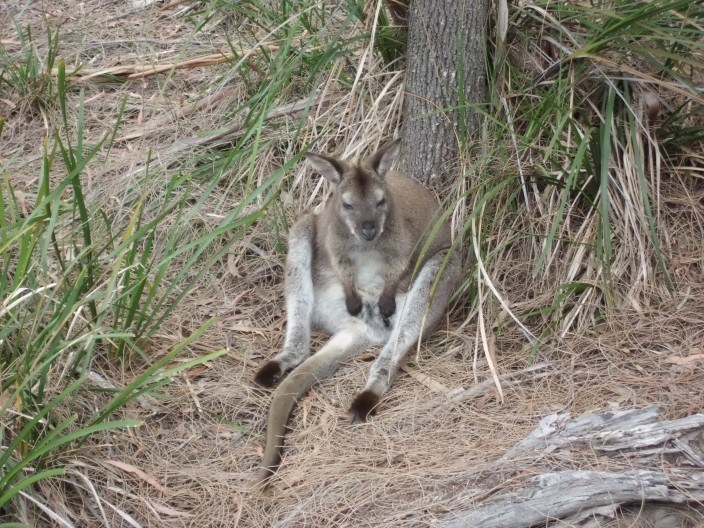 After about 30 minutes we finally arrived at the beach and another kangaroo welcomed us. The beach is nice but I think the beach at the Bay of Fires is much more beautiful than at Wineglass Bay. Perhaps the choice of the 10 most beautiful beaches should be reworked. But maybe it was the weather’s fault I didn’t like the beach so much. It was very windy and the sand dispersed all the time. 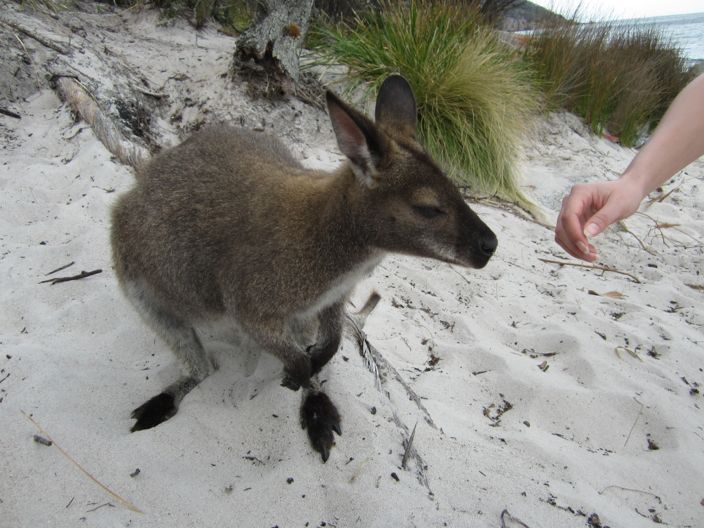 Therefore we decided to move on after about an hour. We wanted to see the Hazards Beach which is located on the other side of the isthmus. The way to Hazards Beach was flat and surrounded by beautiful untouched nature. After 30 minutes we reached the golden beach and allowed ourselves another break. 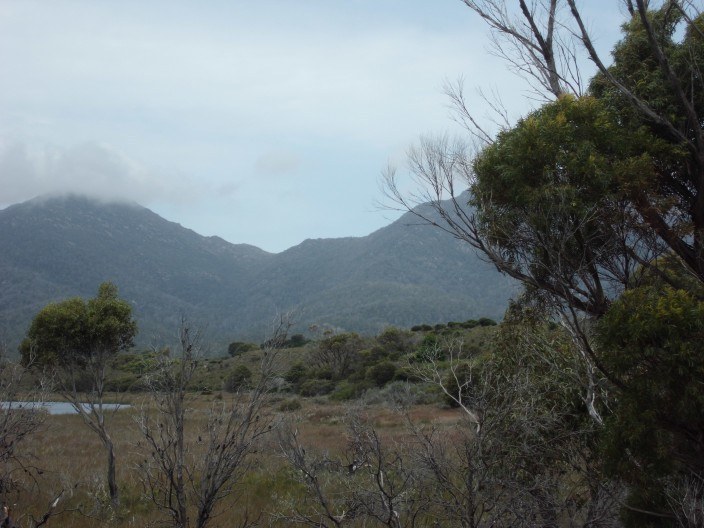 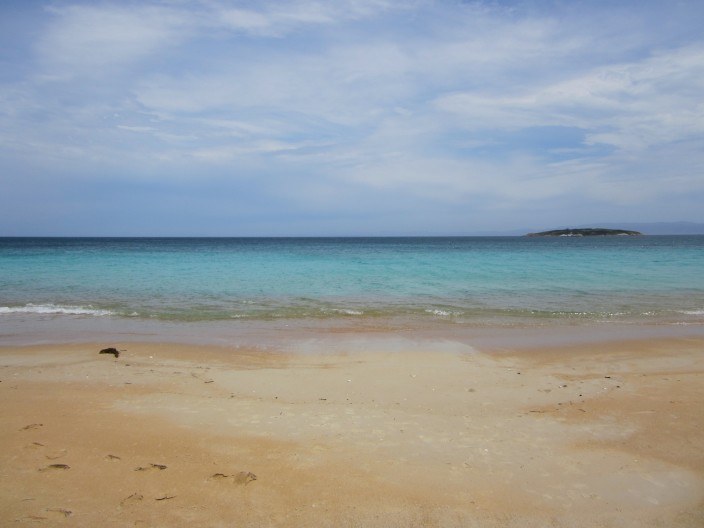 Afterwards we set out for the parking lot. The way heads north at the beach before another track comes up that follows the coastline for about 5,5 kilometres. The name „way“ is rather improper as we had to climb over rocks to make our way back. A way in the classical meaning didn’t exist. 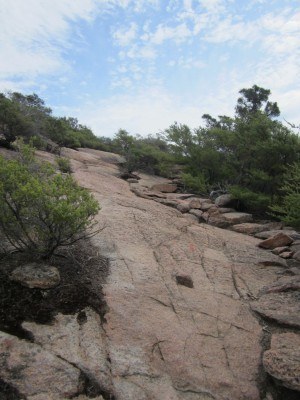 All in all the way is 11 kilometers long and is one of the routes for a half day trip. It was exhausting but we got rewarded with beautiful insights into the Tasmanian nature.

Nonetheless I was happy that we didn’t take our tent with us and therefore had to go back to the car and find an accomodation for the night. I made my way this time and we decided to find a motel room. 2 nights of camping have really been enough for me.

We drove to Swansea which is the next town at the Freycinet National Park. Unfortunately there were no rooms available and we had to move on to the next town: Triabunna. We arrived there at 7:00pm and the place already seemed to be died out. Luckily we found a motel with a free room and checked in. Afterwards we tried to find something to eat and were lucky to find a snack bar still open that seemed to be the only one around. After we ordered they shut the door – probably they had enough income for the day. 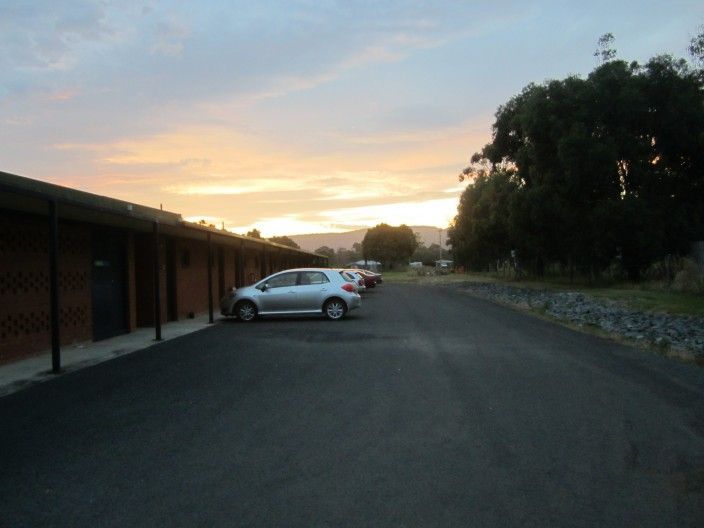 After a recreative night in a real bed we drove on towards Hobart. As we didn’t feel like visiting a big city we only drove through Hobart and headed to the west coast. Our destination was still unspecific – we only knew we wanted to head north again at the west coast.

The ride was spectacularly slow. We partially drove through such steepy serpentines that we weren’t able to drive faster than 10 km/h. There were lots of dead kangaroos on the road – not a very nice view.

After a couple hours of driving we reached a small town called Tullah. We liked the name and decided to stay there for the night. We didn’t have much choices – actually there was only one accomodation: the Tullah Lakeside Lodge. We took a room with a bunk bed and indulged ourselves a big beer with a beautiful view onto the lake. 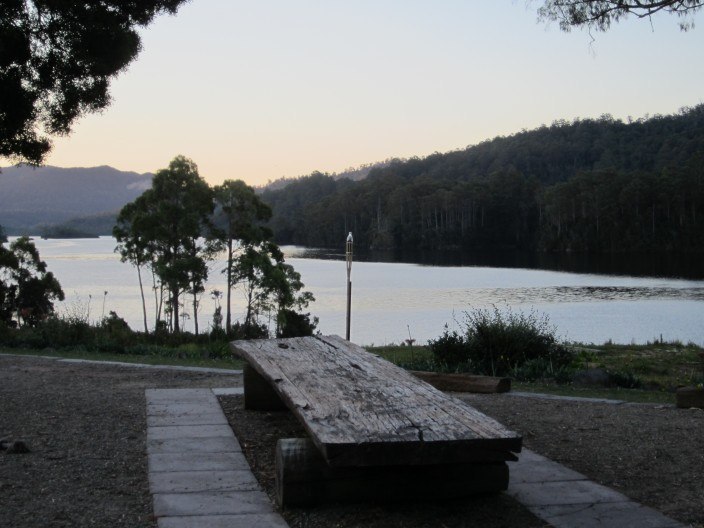 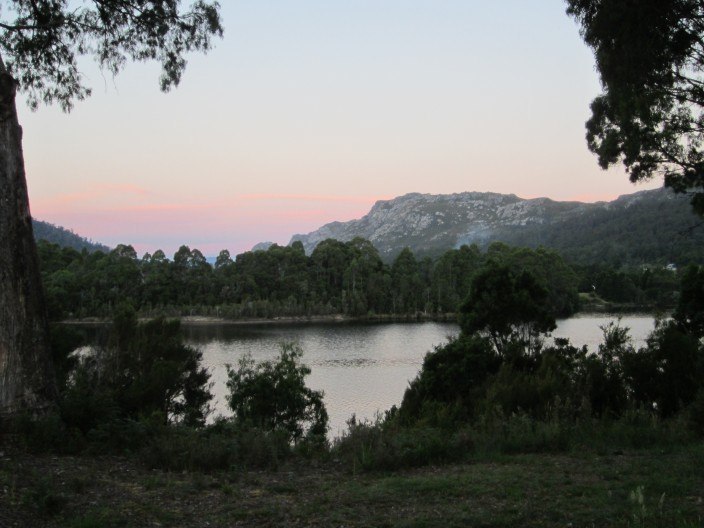 At the last day of our road trip we drove directly from Tullah to Sisters Beach. Katharina’s uncle has a beach house in Sisters Beach where we wanted to spend 6 more days before going back to Devonport.

Actually we wanted to stop at Lake Dove at Cradle Mountain to wander around the lake. But as the weather was bad we decided to postpone the tramp and drive to Sisters Beach directly.

We drove back to Cradle Mountain 2 days later after another day at the beach. Postponing the tramp was a good idea – the weather was good when we started the tour to Lake Dove. But it started to rain once we arrived there. Wandering 6 kilometers around a lake in the pouring rain is the most crackbrained thing I ever did. 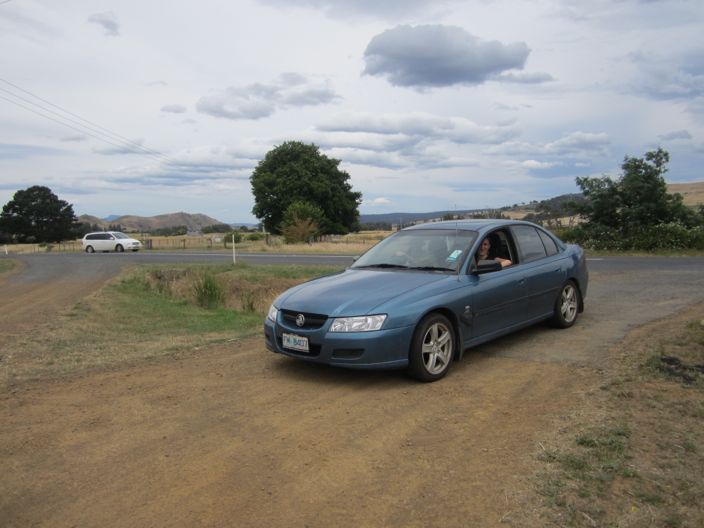 All in all, 4 days is a good time to explore Tasmania by car. With a tent in the trunk you always find a place to sleep – basically you don’t have to search for campsites or motels in advance. You’ll find them everywhere along the way.

And where were the Tasmanian Devils?

But the one thing we only saw one time is the Tasmanian Devil. We saw a single one flitting over the street when we headed to Tullah. Hence we tried to find the little devils in a zoo near Devonport when we were back there. And we found them! 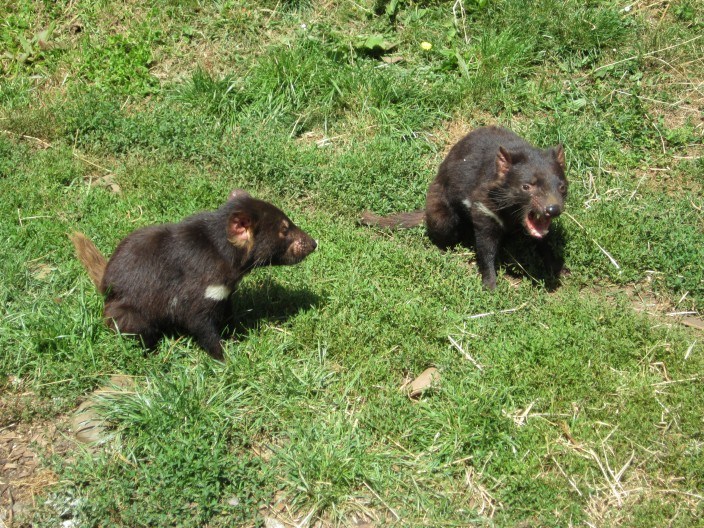 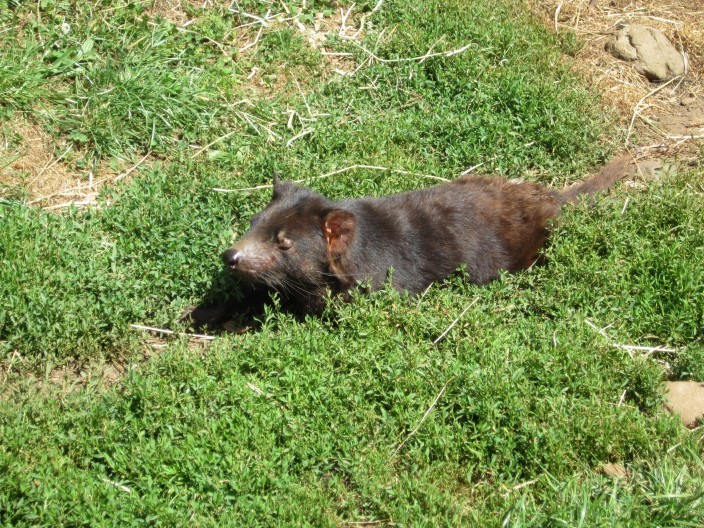 These animals usually are nocturnal. Therefore we were lucky to see them awake in the zoo. But they aren’t cute at all. Many of them have the Devil Facial Tumour Disease and have tumours in their faces and all over their bodies. Further the animals are rather nasty and scream most of the time. I like kangaroos much more!

Did you ever do a road trip across Tasmania? I’m looking forward to your comment!