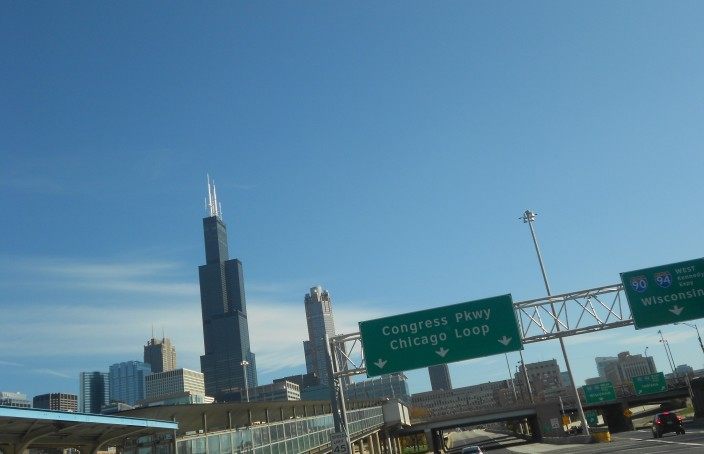 I love this city! I spent much of my vacations here in the past 9 years and did a lot of tourist stuff – but also some things you don’t find in your Lonely Planet. Here is my top 10 list of things you should not miss out on.

Chicago is located in Illinois directly at Lake Michigan and of course offers the feeling of a metropolis usual for America’s big cities with their skyscrapers, but you also have the possibility to relax off the beaten track. By the way, in Chicago it’s not more windy than in other major cities in the US. The name „The Windy City“ rises from the range of politics in the 19. century in the first place. Anyway, it can get really windy due to Lake Michigan.

You should definitely add the following 10 things to your to-do-list for one or more visits in Chicago: 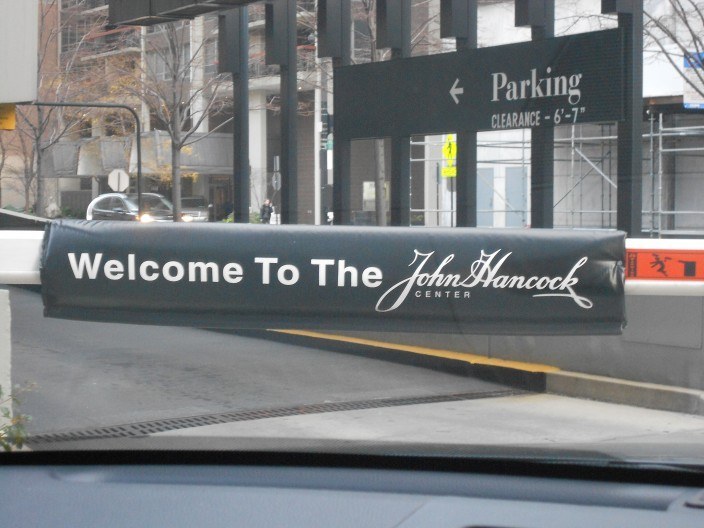 The Hancock Center is located at 875 N. Michigan Ave. Like the Sears Tower, Hancock has an observation deck on one of its highest floors from where you get a breathtaking view over the city. But the tickets for the observation deck are not very cheap.  As an alternative you can visit the Signature Room at the 95. floor. Signature Room is a restaurant with a separated bar zone where you can enjoy a coffee or cocktail and relish the view. The drinks aren’t that cheap as well but you get at least more for your money than just the view. 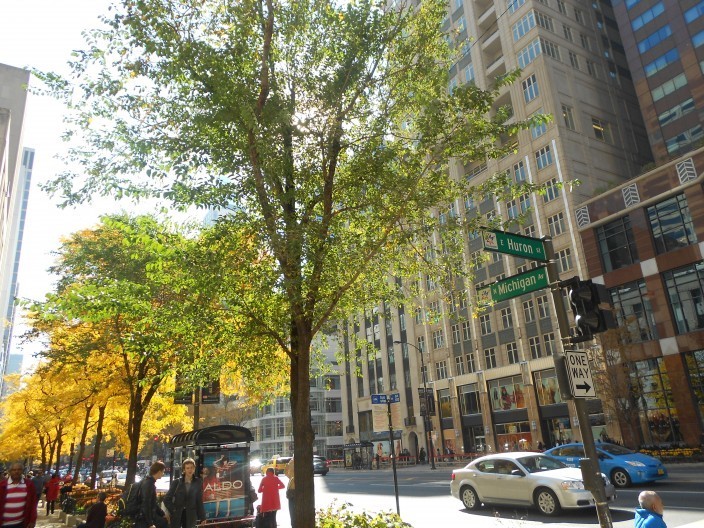 Michigan Avenue is the shopping street in Chicago. After visiting the Hancock Center you can stop at the beautiful Old Water Tower, one of Chicago’s oldest buildings, and then head south on Michigan Avenue. You will find anything you’re looking for and have the possibility to enjoy the wonderful buildings. I like that much more than just being in a huge shopping mall. 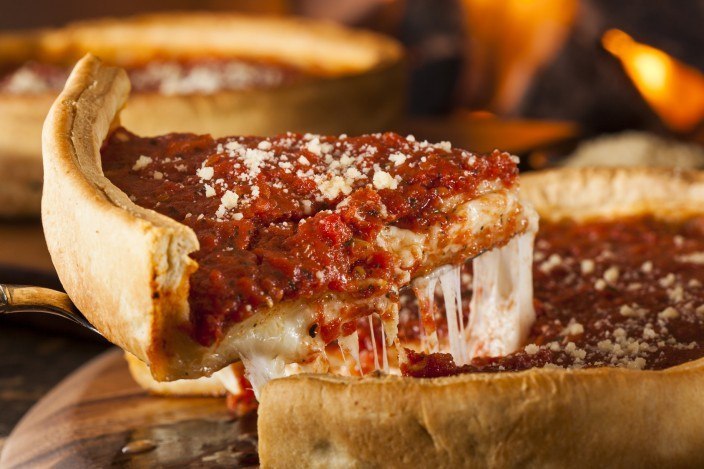 That pizza is amazing! The famous stuffed pizza isn’t just covered but filled with cheese and everything you like „in“ your pizza and then topped with tomato sauce. There are three Giordano’s in downtown Chicago – two of them are located directly at Michigan Ave. 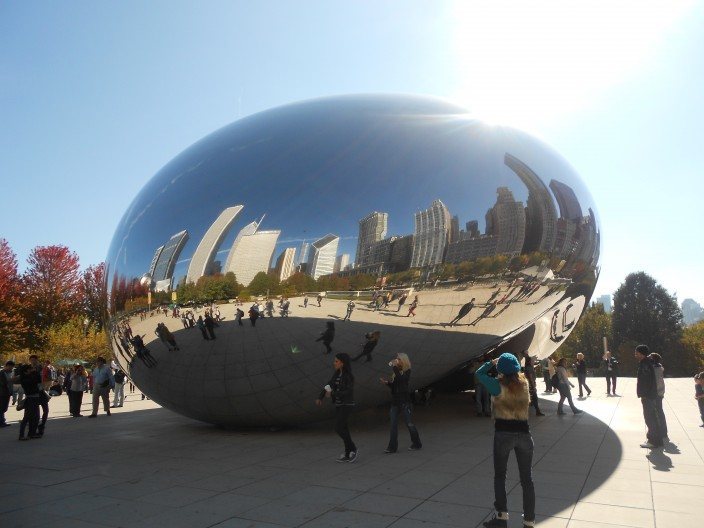 Cloud Gate is a work of art made from 168 slides of stainless steel. Because of its shape it’s also called „The Bean“. The reflexions and the integration of the art work into the cityscape is a wonderful aspect you shouldn’t miss out on. The Bean is located in Millennium Park at the AT&T Plaza on 11 N. Michigan Ave. 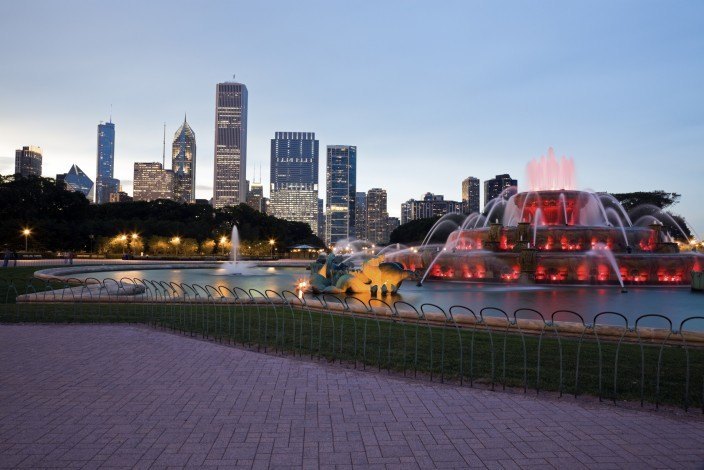 The famous fountain at Grant Park (301 S. Columbus Drive), dedicated in 1927, is one of the biggest fountains in the world. It it located directly at Lake Michigan and the main tank represents the lake. The fountain operates from mid April to mid October from 8:00am to 10:00pm. About 5.7 million liters of water are in motion steadily. With over 800 integrated lights the fountain is worth seeing especially at dusk when you can catch the play of colors best. Fans of „Married… with Children“ should know the Buckingham Fountain from the intro of the series. 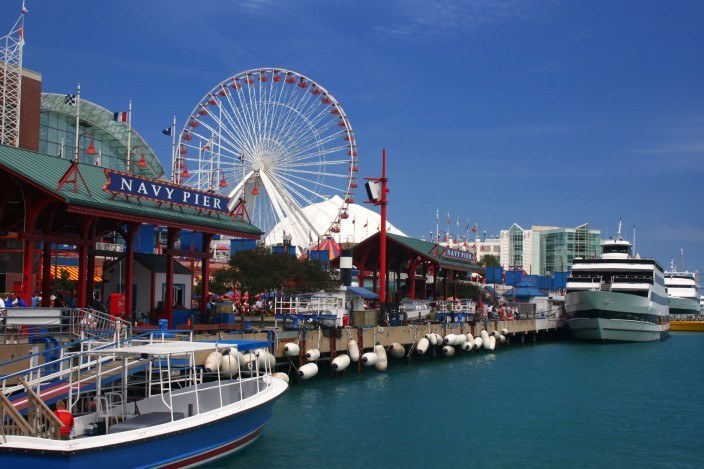 Navy Pier is located near the Millennium Park at E. Grand Avenue. Today, Navy Pier has a 46m high Ferris wheel that operates all year depending on weather conditions. In addition there are a lot of other attractions like a chairoplane and a miniature golf court. The pier is also the starting point for many sightseeing boat-tours on Lake Michigan and for riding jetski. Navy Pier was used as a training center for the navy and as a classroom of the university for homecoming veterans amongst others in the past. 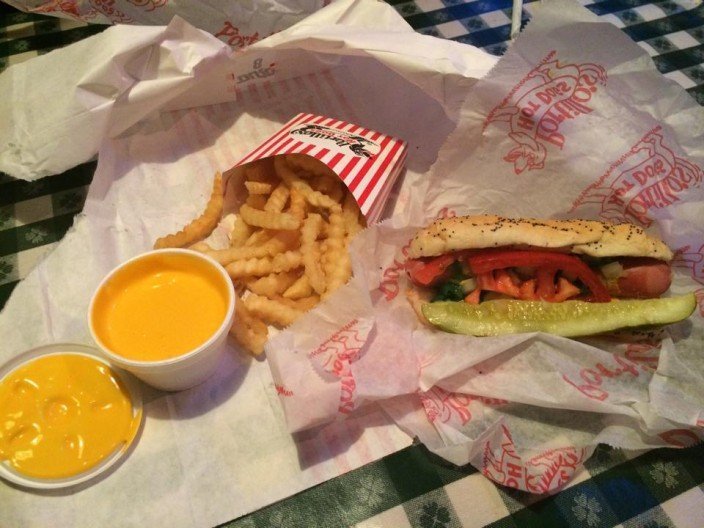 You find many things on a Chicago-style Hot Dog but please – no ketchup! There are a couple of different alternatives all having one thing in common: They are awesome! In addition to Hot Dogs Portillo’s also has sandwiches, burgers and salads. You find the restaurant on 100 W. Ontario Street in downtown Chicago.

8. Rooting for the Blackhawks in United Center 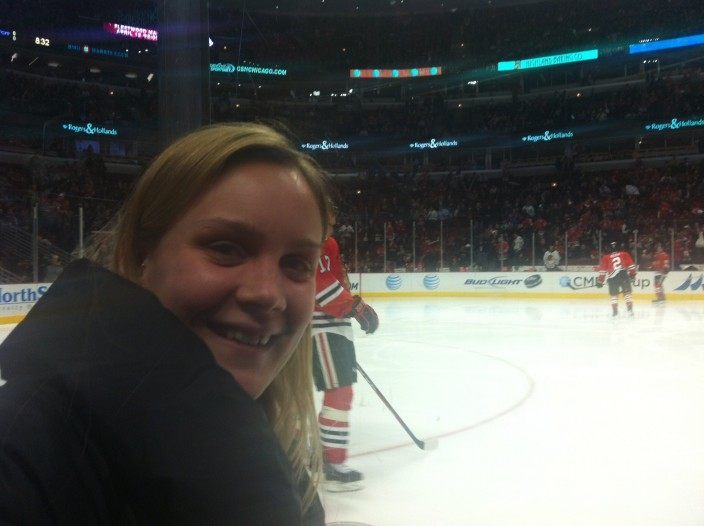 The Chicago Blackhawks are one of the most successful teams in the NHL (America’s national hockey league). The team again won the Stanley-Cup in the last season. Seeing a game of the Blackhawks live is one of my Chicago highlights. The fans celebrate their team and freak out whenever it seems to be making a goal. 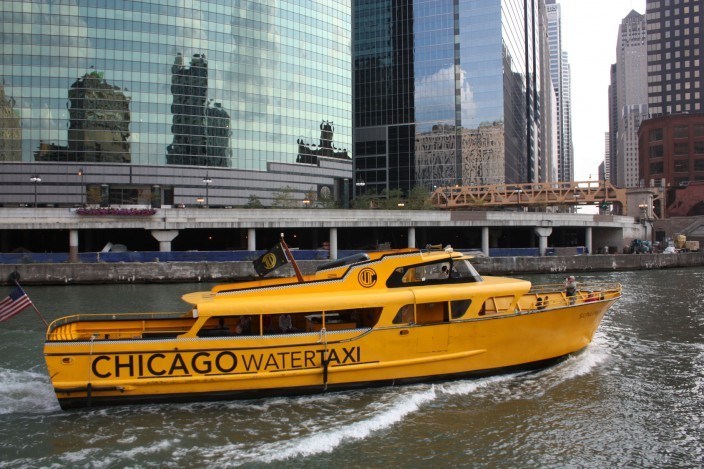 Chicago’s water taxis are a good alternative to going by bus and metro. The taxis operate on the Chicago river and offer a good connection between the most important tourist attractions of the city.

10. Taking the train out of the city 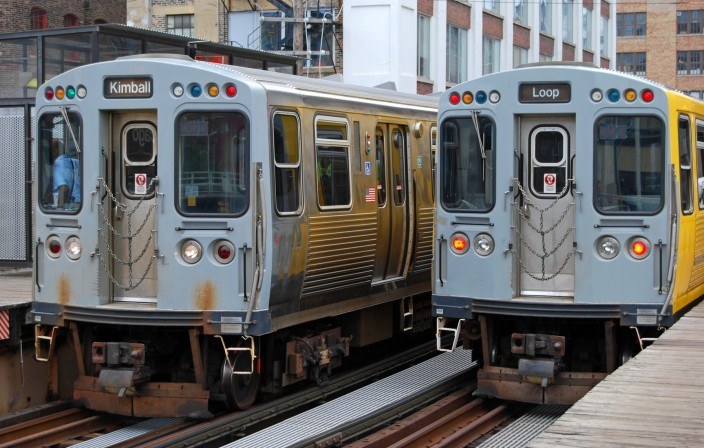 Chicago is a beautiful city and you don’t see any poverty in downtown. But if you take the train out of the city you get to the suburbs real quick. And here you can see a lot of poverty and crime. I was fascinated how fast the cityscape changes when I took the train. You shouldn’t get out of the train in the suburbs as there are not many policemen around. The residents settle dissensions on their own. You should also pay attention when you drive through the suburbs by car.

Have you been to Chicago before and have further things I should add to the list? I’m looking forward to your tipps!

From Cologne to Chicago – the Complicated Way